A Brain Tumour is an abnormal growth of cells within the brain, which can be cancerous (malignant) or non-cancerous (benign). 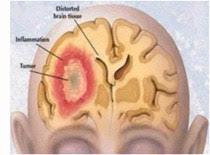