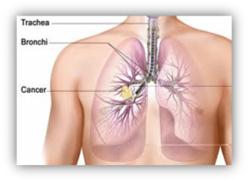 Lung cancer begins when cells in the lung change and grow uncontrollably to form a mass called a tumor. A tumor can be noncancerous or cancerous. A cancerous tumor is a collection of a large number of cancer cells that have the ability to spread to other parts of the body in a process. A lung tumor can begin anywhere in the lung. Good news is, we have treatment for lung cancer.